In a decade or so we won’t call them "electric cars", we’ll just call them "cars". The modifier will drop away, just as dropping the "horseless" part of "horseless carriages" left only "carriages", which we shortened to "cars". 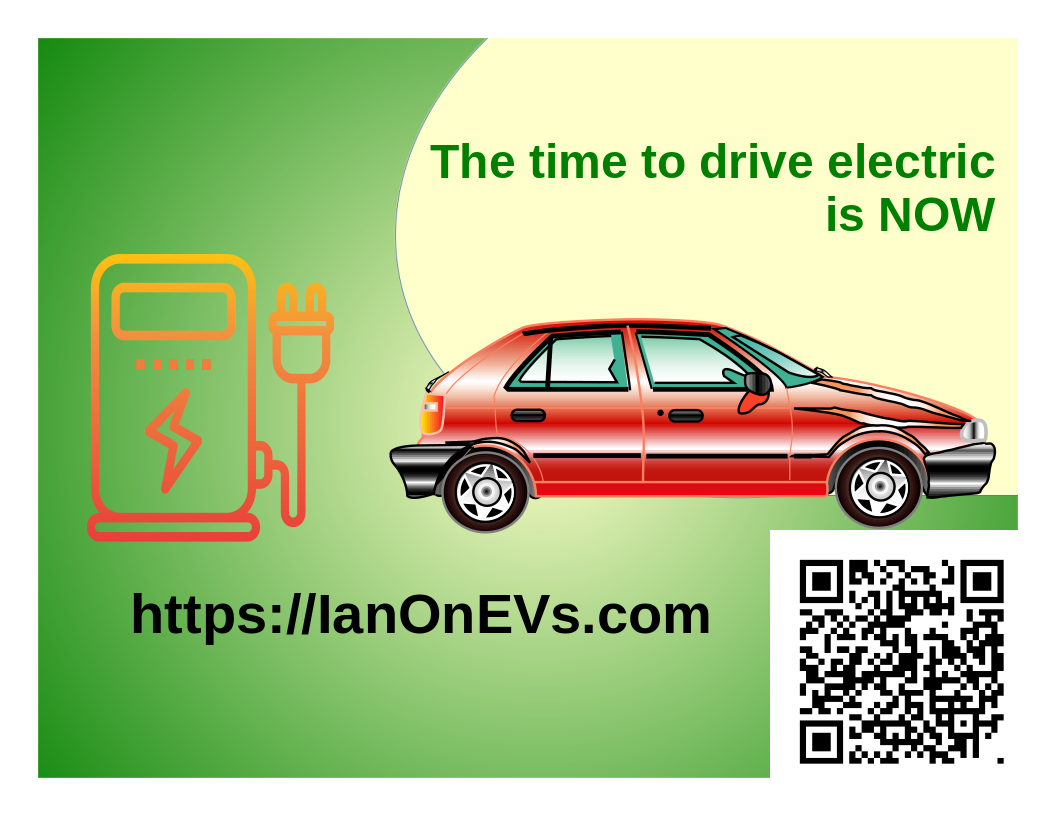 News: Soon to be "the year of the Electric Car?"

The rationale for electric vehicles is so compelling it hardly needs explanation. They actually cost less, in terms of total cost of ownership, (TCO) as pointed out:

EVs are much easier on the driver. The brain-deadening particulate pollution from combustion at source of an EV is zero, the metallic-and-asbestos particulate emission from mechanical braking is drastically curtailed, the greenhouse gas emission at source is zero, and the noisy, smelly gasoline engine and its very inefficient fuel infrastructure is rendered unnecessary. Gasoline engines and especially diesel in contrast emit large amounts of particulate pollution ("soot") which sickens and kills people, even hitting them before they’re born, and adds billions of dollars to healthcare costs. Gasoline cars catch fire and burn several hundred times a day in the US, killing on average about a person a day. Both suicides and accidental deaths from carbon monoxide poisoning are another toxic effect. In fact, the internal combustion engine is already dead, it just hasn’t realized it yet. Don’t take my word for it; see here and in the Economist. Or, if you follow entrepreneurs, here’s Sir Richard Branson, founder of various Virgin Enterprises, on Why we should switch by 2025 not 2040. If you want to see my word on it, check out my Note to My Friends and Neighbors in the Oil Patch.

Overall pollution and GHG is less when EVs are used, even where dirty fuel is used to produce electricity, as has been spelled out many times, by the Union of Concerned Scientists and by the International Council on Clean Transportation and by this paper in Science Direct (original article here). Indeed, given the massive amount of energy used by refineries, and trucking the fuel to the gas station, and the pumping stations, and the gas stations with their garish all-night lighting, some have estimated that it takes more electricity (in addition to the gasoline burning!) to drive a gasoline-powered car 100 miles than it takes to drive an electric car the same distance! EVs are thus significantly more efficient than the ICE vehicles they are starting to replace. When you hear otherwise, it’s probably funded by the fossil fuel industry, stock market short sellers, or somebody with an axe to grind. See CNBC. 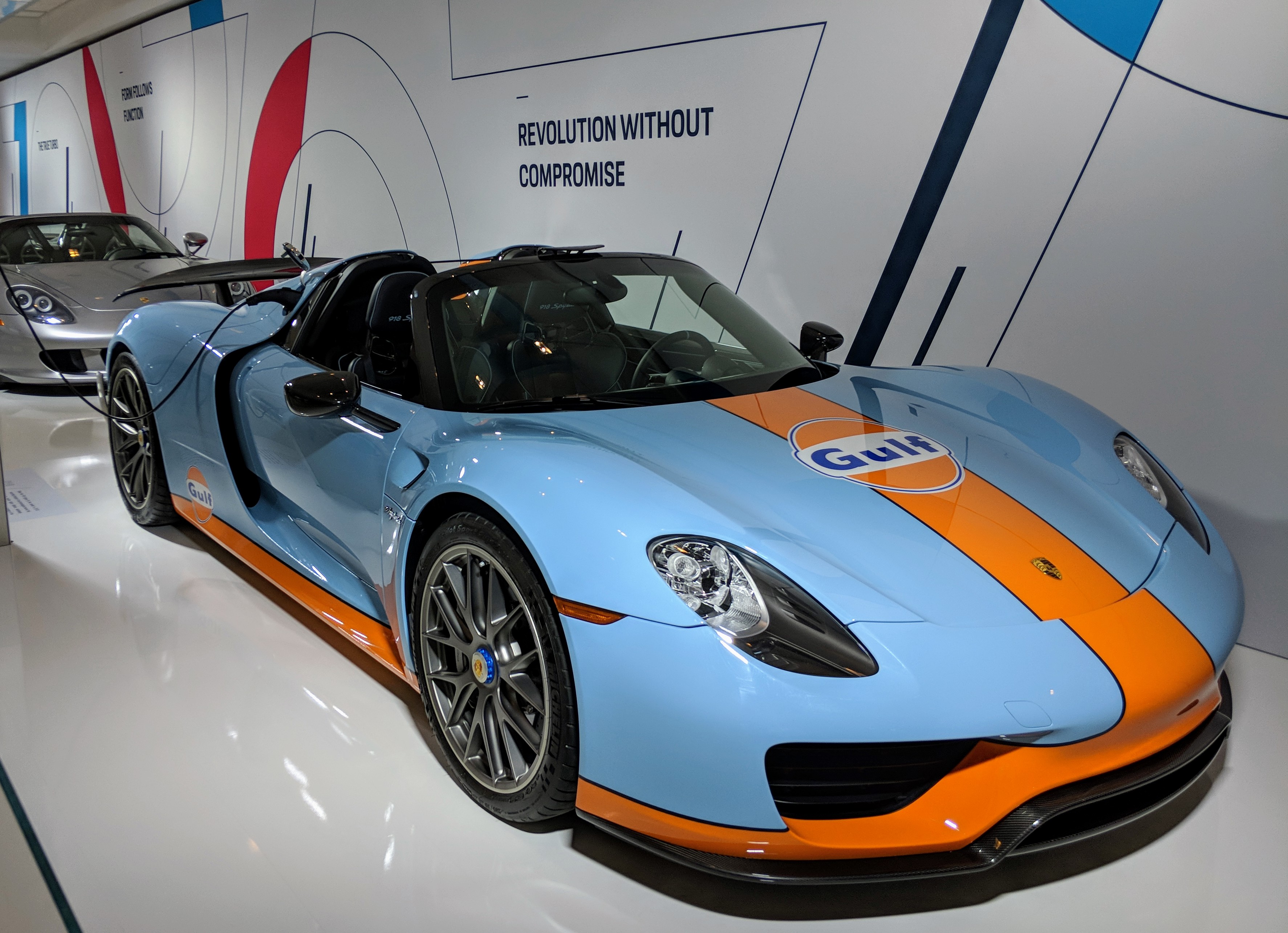 Even staid old-line makers like Jaguar and Porsche have committed to electrification. Porsche offers this discussion on the all-electric powertrain to be used in their near-future EVs, and what electrification means to the automotive world. Porsche exhibited a prototype TayCan at the Toronto Auto Show CIAS 2018. Volkswagen announced a new modular chassis plan (MEB) due to power several models of EV.

However we are creatures of habit, and habits suggest buying a regular gas guzzler or "ICE" (Infernal Combustion Engine) car. So think about the following:

Note that, in terms of cars, I am primarily focused on battery electric vehicles (BEVs) rather than, say, hydrogen fuel cell EVs (HFCEVs). Hydrogen at first seems like a good candidate for a fuel source as it is a very plentiful element, and "pollution free" since 2H + O → H2O - the output of this oxydation reaction is energy and water. However, the laws of physics show that you must use as much energy to drive the reduction (to split water to get the hydrogen) as you get out of the oxidation, thus already half the energy is wasted. That, plus a number of fires at hydrogen fueling stations (not to mention the long shadow of the Hindenburg) have led car makers to abandon hydrogen, most recently https:://electrek.co/2020/04/22/daimler-ends-hydrogen-car-development-because-its-too-costly[Daimler]. Hydrogen may have a place in, for example, trans-oceanic shipping, but you won’t see it dominating on the roads of major countries.

Aside: If you find this information useful, and/or are interested in learning about or buying a Tesla, please use my referral code; if you buy a Tesla using that code, you get 1,000 miles of free supercharging credit on any new Tesla vehicle.

Electric Vehicles are here to stay

Yup. And they’ve been around a lot longer than you think. See this History of the Electric Car.

As of October, 2017, every significant car manufacturer has committed to moving to EVs including the US Big 3 (GM, Ford, and FCA), Jaguar (to invest US$18B over 3 years), Rolls-Royce, Volkswagen, and almost all German and Asian car makers. Some of these, like Porsche have said they will be 100% electric by 2030 or so. Daimler’s SmartCar lineup is already all-electric in North America and will be 100% electric in Europe by 2020.

See also the documentary Revenge of the Electric Car.

Forbes on The Disinformation about Electric Cars.

An early adopter reports that the pioneering days are over for EVs - in his view, EVs are now a thing. Yup.

The Wall Street Journal notes that electric cars will be here sooner than you think (sign-in required).

USA Today has an article on road-tripping with EVs.

This will have impacts beyond the obvious.

The main-line ICE-car makers will be hardest hit.

Here’s my "top 10" list of ways electric cars will "shock" your world.

I have a presentation on Why you should ride electric that will be of interest to schools, clubs and associations, etc. At about 1/2 hour to 45 minutes this covers some background, some of the controversies, myths and realities, and the advantages of electric vehicles. If you are interested in having me present it, please contact me by email (my first name at darwinsys dot com), or using this https://darwinsys.com/contact&subject='IanOnEVs presentation'[contact form].

Charging your EV at home uses less energy than your furnace or your hot water heater, only a little more than your fridge.

Truck information has moved to the Trucks Page.

Buy Used And Save?

One thing is true of almost all passenger vehicles: buy high and sell low. That is, the person who buys a new mass-produced vehicle will in most cases sell it for less than they bought it. Thus, there are often bargains to be had in the used EV market. Autotrader is one good place to look. If you’re new to EVs, you should probably buy from a dealer who specializes in EVs. OTOH, if you really know what you’re doing, you may find a real bargain on an EV that got traded in to a dealer who doesn’t know or care about EVs. There are some issues specific to buying used EVs, so please check out this used EV Buyer’s Guide by Plug In America.

The A-Z of EV Motorcycles

There are literally dozens of companies making electric scooters, e-bikes, and of course mobility riders for seniors; far too many to list here. Find a local dealer.

Ban the ICE for personal transport!

No, I did not come up with this idea, though it’s probably a good idea, in the name of governments protecting us from the aggression of pollution. Several countries and jurisdictions have had the idea. Most of these are not yet passed into law. But some of them will.

I maintained a list here for a while, but now there are so many countries banning ICE cars that my list was perenially out of date, so I happily defer to Wikipedia’s List of Countries (and Cities) Banning Fossil Fuel Vehicles.

While this whole web site could be construed as EV Advocacy, here are some things I’ve written and published or made available;